On the London Brewers’ Market blog, we are featuring a monthly round-up of upcoming and unmissable events for London’s beer drinkers introduced by Rebecca Pate of Brewing East. Here are her picks for what’s happening in Londontown.

London’s breweries hardly stop to catch their breath during the summer months and the events keep rolling in. But as September rears its head, the balmy evenings are curtailed and our time spent lounging in beer gardens will be (rudely) interrupted by cooler temperatures and shortened daylight hours.

It’s a hard pill to swallow, but there’s still time to squeeze the most out of the summer. We must relish the last of the saisons before moving on to the comforting embrace of a stout!

To ease the transition, we give you a round-up of September’s unmissable events in London:

MEET THE BREWER WITH REDCHURCH: Thursday the 1st of September from 20:00. Head down to the Beer Shop London to catch up with The Redchurch Brewery and swill some of their range. There will be bottles available to drink onsite or take home, so stop by and get cosy with this East London brewery in Nunhead. The London Beer Shop, 40 Nunhead Green, London SE15 3QF. Free but places must be reserved in advance: http://www.thebeershoplondon.co.uk/events.html

MS. SHAKESPEARE AT WILD CARD BREWERY: Thursday the 1st of September from 18:30-23:00. The wonderful Wild Card Brewery are hosting an evening with Garden Gate Arts showcasing competition-winning new writing from four female playwrights, who will have their short plays staged as rehearsed readings for the very first time. This will be an incredible evening of homegrown talent and locally-brewed beer, topped off with live music and a pop-up pizza van. Wild Card Brewery, Unit 7, Ravenswood Industrial Estate, Shernhall Street, Walthamstow, London E17 9HQ. Tickets are £11 with booking fee: https://www.wegottickets.com/event/370718

TASTING EVENT WITH ONE MILE END: Friday the 2nd of September from 19:00. Following their big move to their new Tottenham digs, One Mile End are hosting a tasting event at Mother Kelly’s Bottle Shop. Hear about the expansion, their beers and what the future holds for this growing brewery. Samples of their beer- including some rare editions- are included in the ticket price. Mother Kelly’s Bottle Shop, 186 Well St, London E9 6QU. Tickets are £15: http://shop.motherkellys.co.uk/product/onemileendevent/ 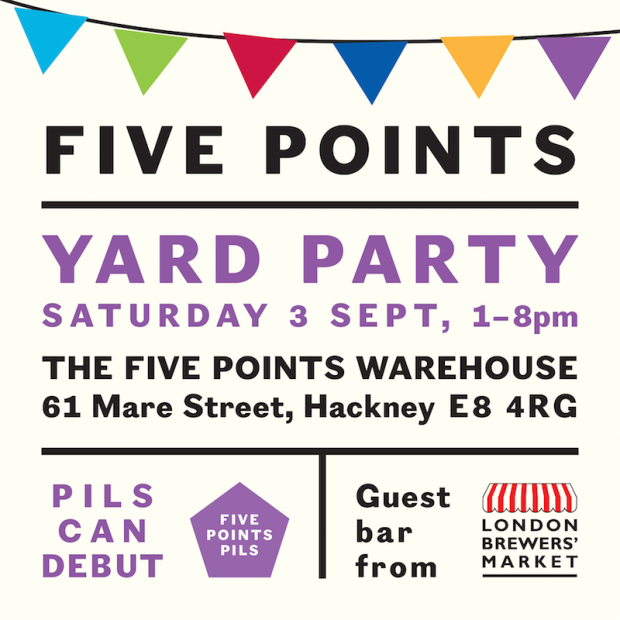 FIVE POINTS YARD PARTY: Saturday the 3rd of September from 13:00-20:00. Once again, The Five Points Brewing Company are opening up their warehouse yard to the public once again. Expect their range on tap, food from pop-up Italian-American purveyors Capish? and live music to get drinkers dancing. This will be a special occasion, as they will be celebrating the launch of their Pils in a can in all its glorious violet glory. Other brewers will be represented on the day in a mini London Brewers’ Market too. The Five Points Brewing Company Warehouse, 61 Mare Street, London E8 4RG. Free: https://www.facebook.com/events/1161364010588171/

SAMBROOK’S BREWERY TOUR: Wednesday the 7th of September at 19:00. Get inside Sambrook’s Brewery in Battersea for a tour lead by head brewer, Sean Knight. Three half pint samples are served alongside the history of brewery, an explanation of the brewing process and the secret to brewing award-winning beer. You might need to take notes. Sambrook’s Brewery, Unit 1 & 2 Yelverton Road Battersea, London SW11 3QG. Tickets are £15 and can be purchased here: https://www.eventbrite.co.uk/e/sambrooks-brewery-tour-open-evening-meet-the-brewer-tickets-24486879917

THE BRICK LANE BEER FESTIVAL: Friday the 9th of September, 15:00. Promising a range of beers from By The Horns Brewing Co., Brixton Brewery and Rocky Head Brewery, this is a solid bet for quaffing a selection of beers from some noteworthy breweries based outside of East London. Live music and some smoked barbecue delights will be on hand from BearBQ. In other words, it’s worth skiving off work early to attend. Exmouth Market Centre, 49 Exmouth Market, Clerkenwell EC1R 4QL. Free: http://www.bricklanebeerfestival.com/

BEER BY THE RIVER 2016: Saturday the 10th of September, 12:00-22:00. Beer? Check. Food? Check. Music? Check. This event is being thrown by Sambrook’s Brewery and promises to be a day bursting with good times. Set on Tooting Common, over 25 breweries will be represented, including a liberal range of Sambrook’s own beer. Pop-up vendors will keep drinkers going and the day promises something for everyone- from kids to the kids at heart. Tooting Bec Common, London SW16. Tickets range from £5- £10 and can be purchased here: https://www.eventbrite.co.uk/e/beer-by-the-river-2016-tickets-18468929064

FIVE POINTS BREWERY TOUR: Saturday the 10th of September, 12:00-14:00. The monthly tour offered by The Five Points Brewing Company is the perfect balance of education and libation. Come along and learn about the brewery’s history, their range and see their brewing kit and packaging lines. You’ll be guided through beer with plenty of samples and- if you’re lucky- might get to stick your head in the mash tun. The Five Points Brewing Company, 3 Institute Pl, London E8 1JE, United Kingdom. Tickets are £12 + booking fee and can be purchased here: https://www.eventbrite.co.uk/e/september-brewery-tour-at-the-five-points-brewing-company-tickets-26519620900

MEET THE BREWER WITH REDEMPTION: Thursday the 15th of September, 18:00-22:00. This is your chance to catch up with Andy Moffat, head brewer and owner of Redemption Brewing Co. based in Tottenham. Stalwarts of the London brewing scene, why not stop by to catch up with the brewery and hear about their brand new brewing site? It’s three times larger than their former unit, so expect to see much more of their beer in your near future. Try some samples and indulge in a slice of Spain from Squid Kitchen’s pop-up kitchen. Craving Coffee, Gaunson House, Markfield Rd, London N15 4QQ. Free: https://www.facebook.com/events/650838458407325/

THE RAINBOW PROJECT AT BEAVERTOWN BREWERY: Saturday the 17th of September, 14:00-20:00. The ultimate beer collaboration is back, and what better way than to spend it at one of the collaborating breweries! Head to Beavertown Brewery on Saturday, the 17th, and enjoy their collaboration beer with Parrotdog, as well as the other beers pairing British brewers, including LBM pals Partizan, with their compatriots from New Zealand! There’s 7 collaborative beers in total, one for every colour of the rainbow, so arrive ready to beer. Beavertown Brewery, Units 17 & 18, Lockwood Industrial Park, Mill Mead Road, Tottenham Hale, London N17 9QP. Tickets start at £40 for entry, commemorative Rainbow Project glass and ALL THE BEER ALL DAY. For serious. Tickets here: https://www.eventbrite.co.uk/e/beavertown-rainbow-project-2016-launch-tickets-26899213271#tickets

POP-UP SUPPER CLUB AT BULLFINCH BREWERY: Wednesday the 21st of September, 19:00-22:00. La Petite Bouchee will be serving up French-inspired bistro classics for this pop-up supper club event at the Bullfinch Brewery in Herne Hill. Rillette and tartes are on the menu and diners can opt for classic moules mariniere in white wine or in a sauce made from Bullfinch’s own Milou saison. So there’s no contest, really- dinner infused with beer every time. Bullfinch Brewery Tap Room, Arch 886-887 Rosendale Road, Herne Hill, London SE24 9EH. Tickets are £30 and can be purchased here: https://www.eventbrite.co.uk/e/la-petite-bouchee-pop-up-supper-club-at-bullfinch-brewery-tickets-27217228463 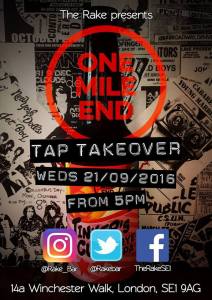 ONE MILE END TAP TAKEOVER AT THE RAKE: Wednesday the 21st of September, 15:00-23:00. One Mile End will be the belle of the ball at this tap takeover at The Rake. Ask the brewers about their shiny new brewery space in Tottenham while sampling their beer and maybe even win some prizes. The Rake, 14 Winchester Walk, Borough Market, London SE1 9AG. Free: https://www.facebook.com/events/678662355619911

BRIXTON BY BRIXTON: From Thursday the 29 September, 16:30 until Sunday the 2 October, 22:30. It’s The Craft Beer Co Brixton’s 4th Birthday and you’re invited to come along and get caught up in the revelries. They’ve joined by Brixton Brewery to celebrate the momentous occasion, offering a range of Brixton’s beers on tap, a meet the brewer event and a cracking DJ line-up. There will also be food onsite and a great party atmosphere guaranteed.  They grow up so fast, don’t they? The Craft Beer Co. Brixton, 11-13 Brixton Station Road London, London SW9 8PA. Free: http://www.thecraftbeerco.com/events/2016/9/29/brixton-by-brixton-a-four-day-celebration-of-the-best-of-sw9

Have we missed something? Feel free to post any upcoming events featuring London breweries in London in the comments below.

There was an error retrieving images from Instagram. An attempt will be remade in a few minutes.